What is Hybrid Working?

A Google search for ‘hybrid working’ yields 4,800,000 results – and nearly as many definitions.

The term is broadly accepted to mean a blend of working in the office, from home, and in other locations such as cafes, shared workspaces and hubs.

But such a definition is a one-dimensional view of hybrid working that only considers where people work. Professor Lynda Gratton, amongst others, makes the point that true hybrid working also allows greater flexibility around when people work.1

When co-location is no longer essential or possible, even small organisations can employ more geographically dispersed workforces working in different time zones.

Hybrid working can also allow greater flexibility around how people work. Indeed, a shift in focus from presenteeism to outcomes achieved is essential for successful hybrid working.

Moving to a longer-term solution

The shift to hybrid working was well underway before the mass evacuation of offices in March 2020 in the face of the emerging pandemic.

O2, for instance, successfully trialled WFH for a month in 2012, when travel to and from its Slough offices was threatened with disruption by traffic for the Olympic rowing events nearby. Finding productivity soared during that period, O2 adopted longer-lasting flexible working arrangements.

Nevertheless, the sudden disruption in 2020 found many firms wanting. Nearly three-quarters (72%) of IT directors surveyed said they were unprepared for the abrupt transition.2

Those that did it well soon reported impressive productivity increases. Several made bold announcements about closing flagship offices and allowing office workers to work from anywhere.

But the immediate arrangements in response to Covid – while demonstrating admirable agility in many cases – were always unlikely to result in long term solutions.

First, the pandemic required a move – in most cases – to a pure WFH model rather than a hybrid arrangement.  There were pragmatic worries, such as the poor security of domestic IT systems and possible lawsuits from employees expected to work at unsuitable home desk setups that had not been assessed.

And more strategic concerns, such as how the needs of clients and customers could be best served in a hybrid model, also needed to be considered.

After the initial novelty of working from home was long gone, some employees found themselves staring at a screen, working on documents, or attending Zoom meetings for ten or twelve hours a day. For others, work had historically offered a brief but welcome escape from claustrophobic or threatening domestic arrangements.

In a Change Associates survey of 550 UK workers, a third expressed a preference for the traditional office model, a third wanted to work exclusively from home or work from home with occasional visits to the office, and a third preferred the idea of a blend. 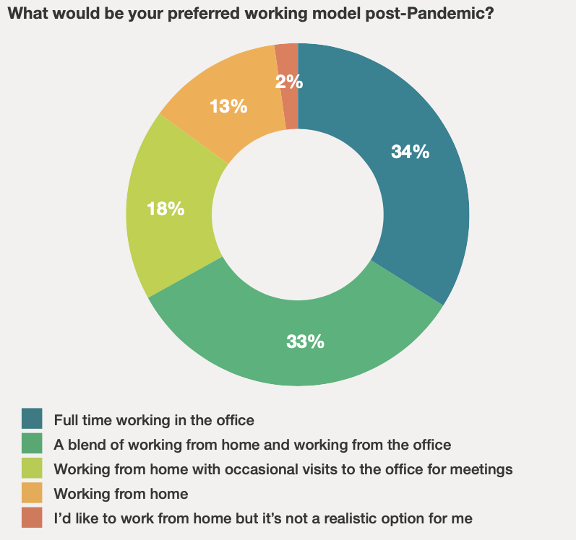 So in the longer term, it seems likely employers will need to offer a hybrid model that gives a degree of choice for the individual while ensuring team members are in the same place at the same time when it matters.

How organisations can achieve this is explored in more detail in future blogs.

This article is adapted from the Change Associates report, Making Hybrid Working Work, which can be downloaded from the research section of this site.

Trevor Lambert
Trevor is a marketing consultant who provides marketing leadership and execution for Change Associates.

Latest posts by Trevor Lambert (see all)
We use cookies on our website to give you the most relevant experience by remembering your preferences and repeat visits. By clicking “Accept All”, you consent to the use of ALL the cookies. However, you may visit "Cookie Settings" to provide a controlled consent.
Cookie SettingsAccept All
Manage consent