Leaders need to raise their DQ

The natural order of leadership is changing over time as a new generation, well versed in digital developments, launches start-ups from their bedrooms. However, in more traditional organisations, it’s still common for leadership positions to come with age and experience.

Many of these more traditional leaders are still playing catch up with the true meaning of ‘digital’ and how to integrate it seamlessly into their lives and business. And they will increasingly be doing business with – and facing competition from – a generation for whom digital media is natural territory and where there is little or no blurring of the lines between and offline environments.

(As a parent, I sometimes worry that our children are becoming absorbed in the digital world at the expense of reality and are therefore missing out on learning human values that have been embedded over millennia, but that’s a rant for another blog!)

Political, educational and business leaders need to embrace ‘digital’ to the point where its use as an adjective becomes almost redundant. For this to happen, a new form of intelligence needs to be cultivated.

IQ, EQ and beyond

We have become well accustomed to the notion of intelligence being measured by a level of IQ, and the works of Howard Gardner, Daniel Goleman, Edward de Bono and others have introduced the concept of multiple intelligences. In particular an ability to recognise and control one’s emotions and to have a positive effect by recognising and adjusting to the emotions of others is widely accepted as ‘Emotional Intelligence’ or EQ (literally ‘emotional quotient’).

It should be no surprise, therefore, that the term ‘Digital Intelligence or ‘DQ’ has recently arisen to represent the skills we need to thrive in the increasingly connected world.

Yuhyun Park, Chair of the Infollution ZERO Foundation, writing for the World Economic Forum, has released a list of eight digital intelligence skills that we should be teaching to children preparing to enter the future workplace. They offer an equally useful checklist of any leader wishing to improve her or his skills in this area. And it’s worth noting that the recommended skills are as much about values and behaviours as they are about technical understanding.

The eight skills are categorised under three levels: 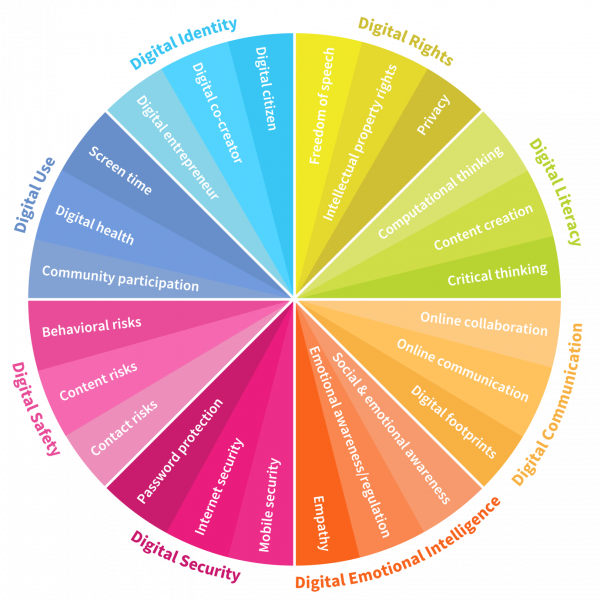 Park’s work helpfully focuses attention on the entrepreneurial opportunities of digital as well as the creative, encouraging the next generation to seek digital ways to address old challenges and create new opportunities.

Too many leaders focus on ‘keeping up’ with digital developments. We would argue that those looking for longevity in their business and their careers, need to think about gaining momentum.

Only then will leaders be ahead of the curve and positively shaping for the world that our children already see as the norm.

If you need help with any aspects of your leadership development proposition, please get in touch with us – you can reach us via email or give us a call on 0207 101 1979

Sian Dodd
Sian is a research associate at Change Associates conducting research and analysis for many of our thought leadership reports.

Latest posts by Sian Dodd (see all)
We use cookies on our website to give you the most relevant experience by remembering your preferences and repeat visits. By clicking “Accept All”, you consent to the use of ALL the cookies. However, you may visit "Cookie Settings" to provide a controlled consent.
Cookie SettingsAccept All
Manage consent